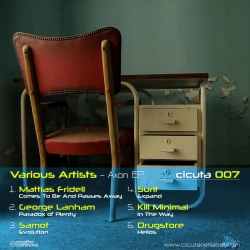 After three months immersed in the deepest darkness (with three releases that have penetrated deep into the minds of hard techno lovers), and as before the arrival of spring, from Cicuta Netlabel return to the fray with a release reflective, elegant, leisurely. Reference to taste, no doubt…

We open the EP with Swedish Mattias Fridell, one of the artists with more experience and more respected in the European techno scene. He left behind his most aggressive and powerful face that he exhibited in the middle of the last decade on labels like Audio Assault or ARMS, but still has techno in his veins and a lot of quality in his mind. A luxury and a pleasure for Cicuta’s crew to have him on board.

We continue with English based in Barcelona George Lanham, owner of Technopodcast.com blog and talented producer, who has drawn the attention of Dave Clarke. His latest project involves creating Pareto Park label, which has raised great expectations in its first reference, who signs George himself.

We continue with two artists who are in fashion in recent months in the techno scene. We speak of the Spanish duo Surit and Samot, recently consecrated after the success of his new label, Nexe Records. This time we bring a cut by each one of this deep techno that is catching on all the European elite.

The counterpoint in this case is provided by one of the artists who has reached more impact on the scene netaudio with his releases. Kill Minimal is one of those artists recognized by many of the artists and promoters in this country for its quality and good work in the field of production. His stay in Berlin and the influences acquired has been perhaps one of the distinguishing features of this great artist.

Finally, as usual, from Drugstore we present one own work. This time we bring a track atmospheric, quite different from what we usually do, very much in line with the rest of the release.

Relax, listen and enjoy. Welcome, this is Cicuta Netlabel.

Thanks a lot guys, happy to be on this release.
George Lanham (technopodcast, Pareto Park Records, EN)

Great V/A Ep! I am really involved by Fridell, Samot & Surit´s tracks! I will play these. Thanks.
Stefano Infusino (Gynoid, HTH, Parallel 125, IT)

Solid release with a great diversity of various dark techno jewels. Expect to see some of those tunes played in my next mixes. Cheers for the promo.
Peter (Heaven To Hell Records, UK)

Thanks for the promo V.A My fav are:
1) Mattias Fridell – Comes To Be And Passes Away
2) Surit – Expand
3) Drugstore – Helios
Luca (Shout Records, IT)

Untill now I’m amazed by the high quality of the releases from Cicuta… And also the constant rate of 1 release each month is quite unique. Again with this 7th release things move in my head… Great sounds are the base for a great future ahead for this label… From this release the Kill Minimal track “In the Way” inspires me the most… I will add some of the tracks to my “To Play” list…
Steven (1MC Radioshow, DirtyRadio, UK)